Socializing a dog is about more than just exposing your dog to strange people, places, dogs, and things. It’s also about teaching your dog how to behave politely around them. For most of us, our ultimate goal is a dog who confidently and calmly ignores (or maybe greets and then moves on) people and dogs.

But simply exposing your dog to strange things isn’t guaranteed to help with this goal! You might be exposing your dog to something that spooks him. This won’t help him get over the fear (ever tried to just toss spiders at an arachnophobe? It doesn’t help). Or, if your pup is super-enthusiastic about this exposure, you might be inadvertently rewarding her for rude, over-the-top greeting behavior.

So what should you do instead?

My dog Barley was nervous of people with strange silhouettes. When I first adopted him – walkers, beards, hats, trekking poles, backpacks, umbrellas, robes, you name it were scary. I started out just crossing the street whenever we saw someone potentially scary coming. I didn’t want Barley to feel forced to interact or come too close. If he looked at the scary person, then looked back at me, I fed him a treat. Over time, we started to just step off the curb instead of crossing the street. Eventually we passed the people without interacting. After a few months, we let him meet people if he looked like he wanted to. It only took a few months, and now people don’t even believe me when I say he used to be scared of strange people!

If you notice any particular problem areas, it doesn’t hurt to reach out to a local positive reinforcement based trainer for further support.

It’s also important to note that your dog’s response to new things will be much more “plastic” or flexible the younger she is. Generally, a dog under the age of about 16 weeks is considered to be in her critical socialization period. It’s far easier to socialize her at that age, versus with an older dog.
It’s not impossible to socialize an older dog. However, working through fear, aggression, phobias, or other behavioral issues with an adult dog falls outside of the scope of basic socialization.

You can always work on training techniques with any dog – not matter their age. You can learn more in our blog Senior Dog Training – Is it too late? 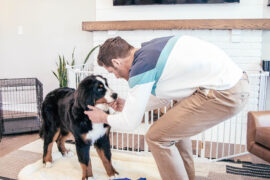 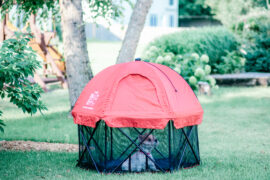 RV and Camping List for Traveling with Your Dog 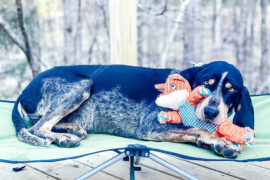 The Psychology of Your Dog