It’s time to cut your dog’s nails, but he runs when the nail clippers come out. No amount of pleading can get him to sit still, so you give up! You’re not alone; most dog owners are familiar with that scenario. But you can’t just let your dog’s nails grow, and trips to the groomer are expensive. So, what’s a dog lover to do? Before we jump into our tips for painless nail cutting, let’s take a look at why it’s important to keep your dog’s nails trimmed – and why he might be afraid of it.

Why It’s Important to Cut Your Dog’s Nails

Long nails trap your dog in a vicious cycle of pain and aversion. When the nails are so long that they touch the ground, they put pressure on the toe joint, causing pain and realignment of the leg and foot joints over time. If left untouched for too long, the nails can curve under and into the skin, making it difficult and painful to walk. Even if the nails aren’t that extreme, long nails can scratch your pet, your floors and even yourself. They might also split under the pressure placed on the nail bed, possibly requiring veterinary attention.

When your dog is in pain from overgrown nails, he won’t let you touch his paws, which makes addressing the problem even more stressful for both of you.

Why Are Some Dogs Afraid of Getting Their Nails Cut?

All it takes is one wrong move for your dog to develop an intense phobia of having his nails cut. Most owners know you shouldn’t trim too close to the quick, the sensitive tissue just under the nail. Cutting the quick is incredibly painful and can cause lots of bleeding. But there are other reasons a dog might avoid the clippers. Rescue dogs, for example, may have suffered neglect and developed anxiety and other problems that aren’t related to clipping, but affect their behavior nonetheless. When a dog’s nails are neglected, the quick grows longer. In extreme cases, the nail needs to be carefully filed or trimmed back until the quick is shorter, which can distress an already-anxious dog.

If you’re afraid to cut your dog’s nails, he’ll know right away and respond with fear of his own! A calm, confident tone is necessary to avoid any freak-outs (from the dog or yourself!).

Cutting your dog’s nails can be hard, but it doesn’t have to be. Armed with these tips, you’ll be able to give your dog the very best care – and he’ll have the nicest nails on the block. 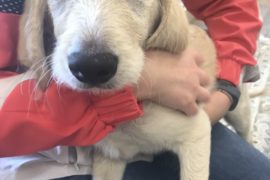 When Should I Spay/Neuter My Dog? 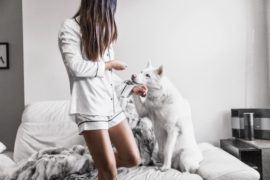 What medicines does your dog need throughout the year? 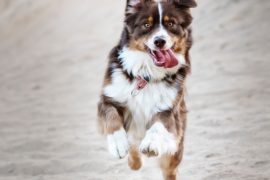 How much exercise does a dog need?