Rescuing a dog from an uncertain fate is admirable. Cassie, did this for both her dogs. The more rescue pups the more reward and love, right? Right. Bear and Koda are two mild tempered rescue pups who not only found forever homes, but found a best friend in each other. We talked to Bear and Koda’s mom about her choice to rescue not one, but two sweet pups.

What do you know about their pasts?

Bear was one of an unwanted litter of puppies in South Carolina. The owners gave some dogs away for free, and the ones that weren’t taken were just let loose into the woods at 8 weeks old to fend for themselves.

Luckily, most were found and quickly put into foster homes until they were adopted. Bear’s siblings that were found with him were actually black lab mixes, he was the only fluffy one! We think Bear is a Golden Retriever, Chow Chow, Lab mix!

Koda was part of a litter that was rescued from floods in West Virginia. One of his siblings had the same coloring and fluff as Bear, and the other one looked like a lab/pit mix! We aren’t sure his exact mix.

Where did you adopt Bear and Koda?

I adopted Bear from Sweet Adoptables Rescue in Connecticut, but he’s actually from South Carolina. The rescue helps in need pups from the South and sends them up North to be adopted! I didn’t get to meet Bear before I adopted him, but I knew he was going to be perfect for me and my family.

Koda was adopted from Paw Safe Animal Rescue in New York, but he’s originally from West Virginia. They have tons of adoptions events every year and adopt out so many dogs!

Why did you decide to rescue?

I first decided to rescue because of the line of work I got into. Growing up, I was always a huge animal lover but we mostly got our dogs from breeders (still amazing dogs!!). I started working at a dog kennel and saw so many beautiful and cool rescue mixes that were amazing dogs.

I decided my next dog would be a rescue. Since adopting Bear, I decided I loved rescue mixes and wanted to keep rescuing!

How did you know that each dog was the right dog for you?

With both Bear and Koda I used petfinder.com. My first rescue, I knew I wanted a large fluffy dog because I had always loved them. I searched for months before applying for a few dogs, but they didn’t work out. When rescuing, it can take a few times before you get a dog you want. Things fall through, but don’t be discouraged.

I feel like they didn’t work out because I was meant to have Bear. I fell in love when I saw his picture and heard his story. One look at that fluffy looking bear cub and I knew he was going to be a part of my family. I applied for him and thankfully; I was chosen to be his new forever home. Getting the news that they had approved me was an exciting experience, but not as exciting as meeting him for the first time. The moment I met him I fell even more in love!

I also fell in love with Koda’s picture. I applied to be approved by his rescue, and I was. However, with Koda’s rescue they do adoption events where it’s first come, first serve. So, you couldn’t just put a dog on hold.

I was so determined to have Koda that I slept in the parking lot of the pet store that the event was happening at overnight. We ended up being 4th in line to meet all the puppies, and everyone in front of me wanted different dogs. When I met Koda and I knew I was really in love. We took him home that day!

Have you noticed a change in their behavior since the day you brought them home?

Koda has been the same since the moment we got him. He is the cuddliest, friendliest pup you could ever meet. His behavior hasn’t changed at all, if anything he’s just gotten even friendlier! He has an amazing temperament. He loves everyone and everything.

Bear has changed a bit since we got him. He’s always been a friendly pup, but he was never really energetic (besides his daily walks).  He was just a chill fluffy pup who went with the flow.

Koda brings out the playful side in Bear that we had never really seen, and they really do love each other. Bear definitely acts like the big brother. One time on one of our walks a dog tried to attack Koda. Bear immediately put himself in front of Koda to protect him and scared the dog off. It was definitely a scary but awesome moment showing how much he loves his family.

Did they get along right away?

If you look at Bear and Koda, they are inseparable and love each other. However, the first week we had Koda, Bear was just not having it. After about a week, Koda learned that Bear was the big brother, and not to go near his food or toys. From then on, they were best friends. They do everything together and really do act like brothers. I still remember the time they first played together, it was an adorable moment.

What are their favorite activities?

Bear’s absolute favorite thing to do is go on walks. As soon as you ask him if he wants to go for one and pick up his leash, he sprints over and patiently waits for you to but his stuff on. He also loves snow; if I let him, he would sit out in the snow for hours on end. Which is hilarious, because he’s a southern dog originally!

Koda is the hungriest dog you’ll ever meet. He will eat anything. That is definitely his favorite activity, but he loves walks as well. Koda is also the best cuddler ever!

How has your life changed?

These dogs have changed my life in a positive way. They have gotten me through some tough personal times, and I’ve never felt more loved. They are my best friends, and I can’t imagine life without them! Having two dogs is definitely a big responsibility, but so worth it.

What would you say to those who are thinking about adopting a pet of their own?

Adopting is definitely a great way to get a new member for any family. I would definitely recommend using petfinder. It’s a great tool to search for the perfect pet for your family. Don’t be discouraged if you don’t get the first pet you apply for.

Just remember that you’re going to get the pet you’re meant to have, just like I did! Adopting can be a long process, but it’s so worth it!

Any other fun fact you want to share about them?

We are hoping to get Koda into training to be a therapy dog! With his amazing temperament and love of learning we think he would be a great dog to spread love to others who need it most.

He brightens our days, and we hope he can do the same for others! Both of them are absolutely obsessed with children, especially babies. Anytime they see kids they cry until I let them greet them, it’s the sweetest thing!

Do you have a rescue pup that you want featured on our page? Send us an email! 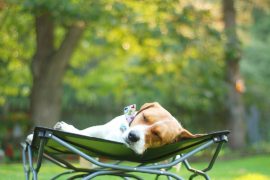 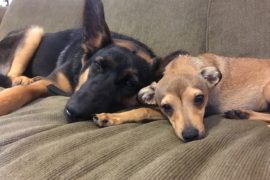 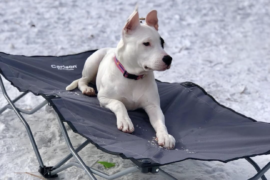