It’s no secret that people love their dogs. According to the ASPCA, about 44% of households in the United States have a dog. Our furry friends are such an integral part of our household, they start to become more than just a pet. They become our family.

So when our “family” is talking to us, we listen. A dog’s primary form of communication is their bark. Dogs bark for multiple reasons, to warn of strangers, to show excitement, fear, discomfort, or boredom, as well as to defend their territory. This is completely natural and it’s good your dog is letting you know how they’re feeling. But what happens when their barking becomes too much?

A Sense of Control

Managing your dog’s bark can be stressful at first. Without the proper knowledge, it can seem like your dog has the upper hand, choosing to bark when and how long it wants to. But you are its owner, and by extension, you are the one that assumes control of your dog’s behavior.

The last thing you want is your dog running the show, barking whenever the kids come home from school or simply for no reason at all. You need to learn to take back control by asserting your dominance and limiting your dog’s barking.

So how do you that? Over the years, dog trainers have devised clever strategies to deal with this very common problem. But before you even attempt to stop/limit your dog’s barking, you need to be aware of what you can do to garner the best results.

Never stop your methods mid-way or your dog will become confused. Practice makes perfect and maintaining a regular schedule will help ingrain new habits in your dog’s mind.

Frustration only hinders your efforts to stop your dog’s barking. It may take a while for him to understand what you’re asking, but with time, he’ll eventually learn to listen to you.

Dogs can read other people’s emotions, so if you’re tired or stressed, they’ll sense it. Remain positive and focused, and you’ll have an easier time in training.

Oftentimes, the best way to stop an annoying behavior is to either remove an item or reward with one. The minute your dog begins barking, you can either take away the thing that’s making him bark or give him a treat when he quiets down. Clicker Training uses a combination of the two, called negative punishment and positive reinforcement respectively, in order to see results.

For example, when your dog sees a person nearby, “take away” their ability to see the person by blocking their view or keeping them at a far distance. Once they stop barking you can then “give away” a treat. A bit of give and take, negative and positive, is what helps to create an obedient pup.

Just like the “speak” command, the quiet command also exists in dog training. The Humane Society shows that the two should actually be used in conjunction with one another. First, tell your dog to speak. Once he’s “spoken” multiple times, dangle a delicious treat in front of him and give it to him the moment he stops barking.

After he understands the speak command, ask him to speak again. When he starts to bark, say “quiet” and put the treat in front of him. Eventually, he’ll learn to associate “quiet” with the combination of not barking and getting the treat.

That way, when he quiets down, you both get a reward!

If all else fails, simply ignoring the bark may just be what your dog needs to get the hint. Don’t acknowledge your dog by looking at him, talking to him, or yelling at him. He’ll think he’s got your attention and will just keep barking.

Move away until he stops barking. Only after he does so should you give him a treat. For even better results, The Humane Society recommends varying the length of time before you give him the treat. This will keep your dog focused and prevent him from returning to old habits.

Like with anything, it takes commitment to make a change in one’s life. It’s even harder when you’re trying to make that change in someone else. But stopping your dog from barking can give you greater peace of mind and a stronger bond between you and your beloved pooch.

Most times, attention and boredom barking can be eliminated by keeping your dog busy and happy. Keep them mentally and physically occupied by walking or running them, playing fetch, and giving them chew toys. A busy dog is a happy dog! 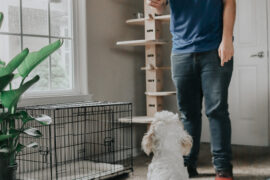 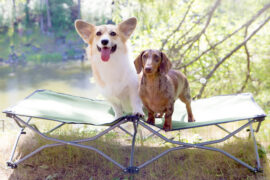 Tips From a Dog Trainer On How to Socialize a Dog