Food aggression in dogs is generally based in fear. These dogs are afraid that someone will come steal their food – so they get defensive without need. Unfortunately, punishing your dog for this behavior, taking away his food, or messing with his food all helps teach him that he’s right – it’s dangerous to let others near his food bowl.

In other words, many common training techniques made to stop resource guarding in dogs actually make the problem worse.

Here are five tips for stopping food aggression in dogs that DO work:

Let Your Dog Eat in Peace.

Most dogs will only behave aggressively around their food bowl if someone is nearby. Many people are able to safely manage their dog’s food aggression simply by feeding their dog inside a crate or in another room behind a pet gate. This tactic serves another function as well, aside from avoiding conflict: it stops your dog from “practicing” the food aggression. The more often your dog is aggressive around his food, the “easier” that response becomes on a neural level. That’s why we never want to provoke your dog into behaving aggressively at all, even as part of the training!

Teach Your Dog Others Coming Near His Bowl is Awesome!

If your dog growls, snarls, snaps, lunges, bites, or charges when people come near his food, you need to help teach him that people approaching his food bowl is actually great. It’s best to do this with the help of a professional trainer, muzzles, and tie-outs. Then your job is to feed the dog with a puzzle toy and intermittently toss even better food to your dog while he eats. Basically, he’ll learn that people approaching his food bowl makes bacon rain from the sky. If he starts behaving aggressively, you’re too close for his comfort right now and it’s time to make training a bit easier by backing up.

Food aggression between dogs is a bit trickier to deal with than food aggression towards people because it’s harder to control dogs than to control people. For dog-to-dog resource aggression, it’s often best to use separation as a long-term solution. Use crates and pet gates to keep everyone safe. It’s also best to err on the side of caution – some dogs who don’t normally get aggressive around their food overreact when they’re stressed by holiday travel or visiting dogs.

Hire a Trainer if Things are Out of Hand.

Low-level resource guarding is generally relatively easy to live with and manage. But some dogs are much more extreme than others. Some dogs will guard resting places, toys, random objects, dropped food, and more. Other dogs go beyond snarling and go straight to biting. In either of these cases, it’s important to get help from a dog behavior consultant (not just any old trainer) ASAP. The International Association of Animal Behavior Consultants has a directory of trainers who have met very rigorous standards for certification.

Even if there’s not a behavior consultant near you on their list, it’s worth reaching out to someone who’s in your state (or the next state over) for their personal suggestion. Avoid using police or military trainers unless you get a recommendation from a Certified Dog Behavior Consultant – there’s a huge difference between training dogs for combat and fixing behavior problems!

Don’t Blame Yourself – Or the Dog.

Playing the blame game rarely helps anyone. When it comes to food aggression in dogs, your own frustration with yourself or the dog can make the situation worse. If you’re feeling frustrated and guilty, your dog can tell and will get more upset. Try to take deep breaths, focus on the good, and be careful as you train. Food aggression is really common and is quite natural in wild animals – so don’t get upset that you’re dealing with it. Just focus on the solutions above!

Stopping food aggression in dogs is mostly about teaching your dog that he doesn’t need to worry about people stealing his food. Trying to show your dog that you’re in charge of his food is a useless step – you’re already the one who decides what, when, where, and how much he eats. Messing with your dog’s food just shows him that he needs to guard it more carefully. 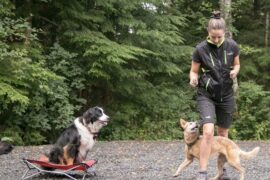 Dog Training at Every Age 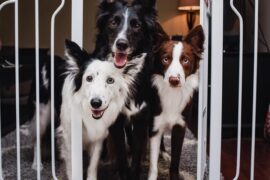 Benefits of Dog Training With a Gate 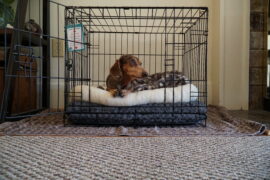